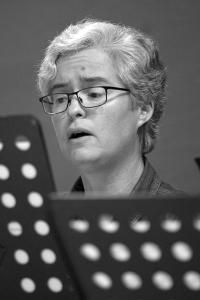 Meanwhile, she completed her University Degree in Psychology at the Universitat Rovira i Virgili (2nd Class of 1990-95)

She holds a diploma in Willems Music Teaching and has also received the Edwin Gordon Early Childhood Music Education Certificate.

Regarding the sphere of choir music, she has been part of various choir ensembles and is a member of the Ciutat de Tarragona Choir since 2004. She joined the Scherzo Female Chamber Choir in October, 2016.

Since the schoolyear 1998/1999 she teaches Musical Theory, Harmony and Analysis, and Choir Singing at the Escola I Conservatori de Música of Reus.