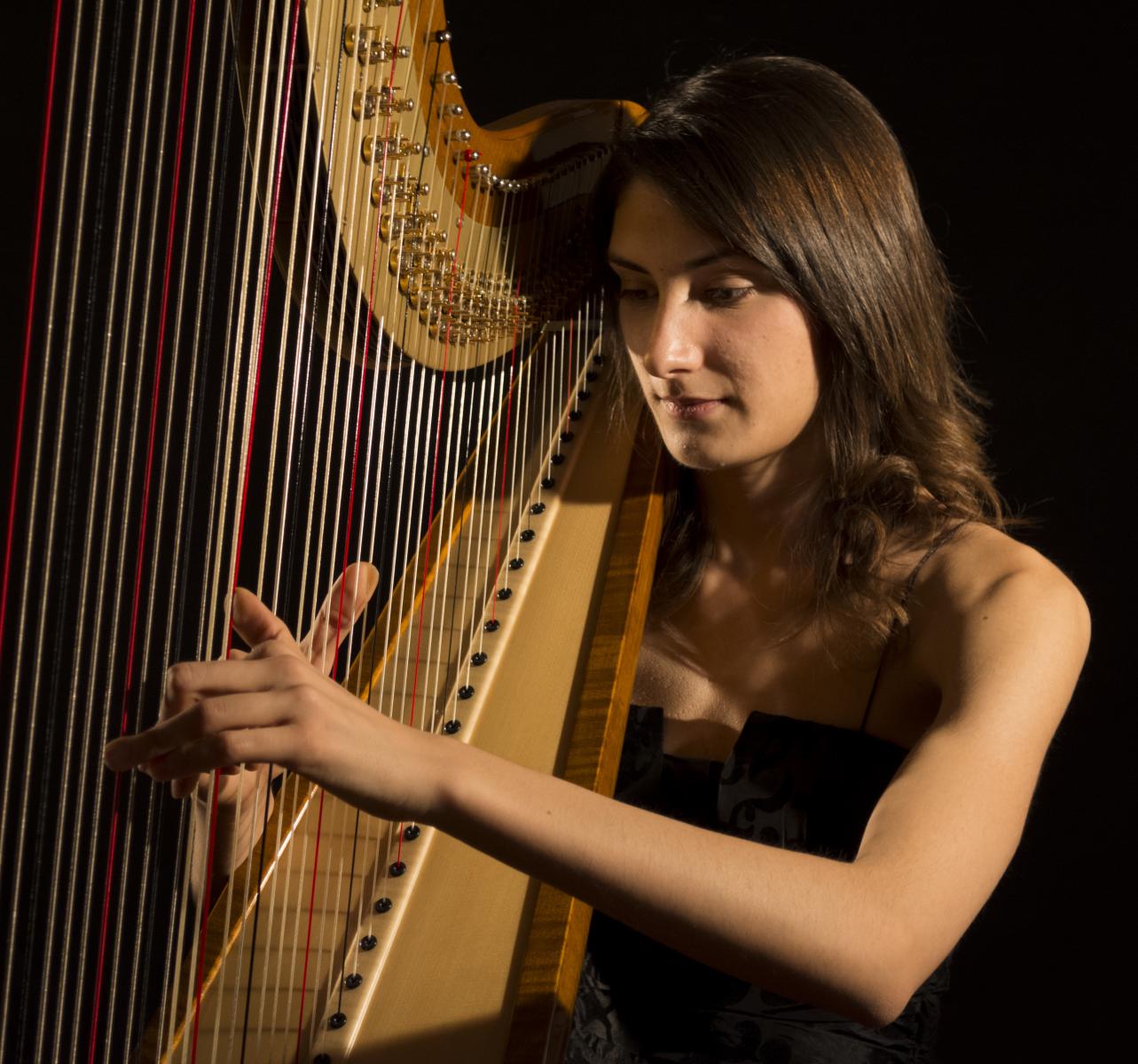 She took her advanced studies of harp with the principal harpist of OBC, Magdalena Barrera, at the “Escola Superior de Música de Catalunya” (ESMUC). Indeed, she was the first harpist graduate of the ESMUC, obtaining the qualification of High Honors in her final degree project entitled “L’arpa impressionista.”

It was at the “Escola de Música Freqüències,” in Vilanova i la Geltrú, that she began to study music. As for the professional level of her studies, she was trained by Micaela Serracarabasa at “Conservatori del Liceu” and by Maria Llüísa Ibáñez at “Conservatori del Bruc.”

She was member of the most important youth orchestras of both Catalonia and Spain. She was also part of the “Jove Orquestra Nacional de Catalunya” (JONC) from 2006 to 2013, of the “Joven Orquesta Nacional de Espanya” (JONDE) from 2011 to 2014, of the “Orquestra de Joves Intèrprets dels Països Catalans” (OJIPC) from 2007 to 2013, and of the “Orquestra Simfònica de Monzón” from 2005 to 2012. The membership of all these orchestras allowed her to perform not only in the greatest Spanish concert halls and auditoriums but also in the best music festivals such as the Santader Music Festival and the Berlin Young EuroClassic Festival, among others.

During the academic year 2011-2012, she enjoyed a scholarship from the Anna Riera Foundation and from the “Academia d’Estudis Orquestrals de la Fundación Barendoim-Said” as well. Moreover, she was academician of the Mahler Chamber Orchestra from 2011 until 2013.

While being tutored by Micaela Serracarabasa, Esther is taking the master’s degree of interpretation at the ESMUC with Madgalena Barrera.

The “Orquestra Simfònica de Barcelona i Nacional de Catalunya” (OBC), the “Giorquestra” (GIO), the “Orquestra de Cambra de l’Empordà” (OCE), the “Òpera Mosset” company in France, and the “MCO” in Germany are some of the professional orchestras in which she is currently involved. Additionally, she is part of the “Orquestra Camera Musicae,” of “Orquestra Simfonova,” and of “Giorquestra.” This year win the first place in the employment exchange for the “Orquesta Sinfónica de Tenerife”, and she’s artist resident in the Pedrera (Barcelona).

While working with the aforementioned orchestras, she has been giving concerts all around Catalonian chambers with the Artemps Trio, the Dewart Trio (flute, viola, and harp), and Blooming Duo (harp and marimba).

Specifically the Blooming Duo project was second-awarded not only in the the “Ciutat de Vinaròs” International Chamber Competition (2012), but also in the the Arjau Interpretation Competition. The 21stChamber Competition José Mirabent i Magrans, in Sitges, also provided them with the prize from the “Mas i Mas” Foundation. They have performed in cycles such as “Música als Parcs 2013” and “30 minuts de música,” organized by the “Mas i Mas” Foundation. Some of their new works come from the well-known compositors Feliu Gasull, Joan Sanmartí, Marc Timón, and Andres Serafini.

There are some albums that Esther recorded together with the “Jove Orquestra de Figueres” and with the “Amics de la Unió” children’s choir. The music company “la Mà de Guido” issued those CDs, which contain great works such as “Ceremony of Carols” by B. Britten, “Dancing Dany” by J. Rutter, and “Conte de Nadal” by Albert Guinovart.

She has worked outside the field of classical music, recording the song entitled “Aniversari” with the Catalonian band “Manel.” It is also remarkable her involvement in the “Òpera amb Texans” TV program led by Ramon Gené in Channel 33.